For work writing, keep it plain. So they say.

"They" being every article or post about writing at work (the ones I've read).

But what if "too plain" rots your brain?

Neuroscientist Carmen Simon thinks we need more. She’s spent many years researching how people understand information and stay engaged with it. Here's what she said at the DX Summit 2018:

Sometimes we have been trained to treat our audiences psyches as being so fragile. It is okay to push a little bit, even though the brain is a cognitively lazy organ – there is just no easy way of saying it – at some point somebody has to jolt them out of their habituation. It is in your hands to do so because if we were to provide a formula for boredom or for disengagement it would be ability minus difficulty. As you investigate your audiences and your thinking there’s this level, the minute that you amp it just a little bit, where it's still doable but not frustrating, then you can have another entry point towards engagement. Don't treat them as having such fragile brains.

In the video, Simon’s talking about examples more visual than textual — complex tables, surprising images. (They’re offscreen, but I know what they are because I was lucky enough to see her give a similar talk in person.) But Simon extends this to simple and complex language too, in her book Impossible to Ignore. She does start by saying that simple syntax is generally best. But she goes on to say that sometimes disfluency – something surprising or complex – makes us pay better attention. Here, for example:

I remember a CEO from a technology company telling me that he would like his audience at the company’s annual user conference to remember the sentence “Create a culture of transparency.” While the syntax was simple, the words were not distinct enough, making the statement trite and predictable and giving the audience members the feeling they had seen it somewhere else before. Eyes and ears would brush right over it. If you Google “create a culture of transparency,” you get about 90 million hits. He modified the statement to “Use technology to speak your mind.” The syntax was still simple, but the dissonance created by an unexpected phrase (“speak your mind”) combined with “technology” commanded extra attention in a corporate context.

This kind of wordplay makes sense, but what if you don't write confidently? (Who really does?) The idea of more interesting writing is good, but what if we make mistakes (or people think we do?). Maybe CEOs and speakers can afford to push the envelope, but us mere managers and workers? Writing feels very exposed. Safer to stick to the guidebooks, surely, even risking our audience switching off? Somehow we sense our high school English teachers having stern words with our boss about our slipping standards.

But what would these grammar ghosts say to Shakespeare about his engaging rule-bending? Professor Joe Moran writes:

A team of neuroscientists at the University of Liverpool scanned the brains of volunteers, using nodes strapped to their heads, as they read Shakespeare in its original and in simpler form. The aim was to see how readers coped with his habit of jumbling up parts of speech. They found that a phrase like ‘him have you madded’ excited the brain in a way that ‘you have enraged him’ did not.

Readers seemed to like sentences that bent the rules without breaking them. When the brain sees a phrase like ‘I could out-tongue your griefs’, it pauses, puzzled, then assents to its distortions. We want a sentence to be clear but not too clear, odd but not off-puttingly so, so that it can catch us off-guard and remind us that we are alive.

Who dares to criticize Shakespeare? Even those finger-wagging shades would shrink. If he stretched rules, can't we? Can't we also refresh readers' brains with a twist from time to time?

OK, if we're willing to try, where to start?

How about this: next time you're writing, try including a longer sentence, maybe 20 words. Make it a nice one: verb near the front, then gradually unpack ideas, adding detail and texture. (The technical term for this structure is "right-branching"). Say it out loud and test the rhythm. Tweak it until it flows. Ignore the dotted lines and other judgments from your authoring tool, and leave it in.

Generally, short-ish sentences are good. But readers pay better attention and get more from your writing, if you mix in some longer sentences.

Other things to tease readers' brains a little:

Of course, techniques like these depend on context. If your domain requires a restricted vocabulary, or you're writing for speakers of other languages at a certain learning level, keep within the bounds. But don't underestimate readers. Brain science shows they respond well to some kind of challenge, in fact they need it.

The message you have to write is useful, I'm sure. Something that could improve companies, jobs, or lives, and for that reason interesting. So it's ok to reflect that interest in your writing; to engage the audience with the form of it too; to demand a little more thought, so they're not dulled to sleep. As with sense, so with style. 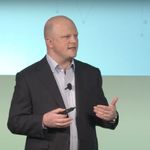 I know something about getting things done through writing.
Me at Mastodon